Misunderstanding, the area where the football stadium cannot be illuminated

Misunderstanding, the area where the football stadium cannot be illuminated

There is a misunderstanding in the lighting of the football field. There are some areas where sports lighting fixtures are prohibited. The main areas are 15° (with TV broadcast) or 10° (without TV broadcast) on both sides of the bottom line and the range below the 60° elevation angle behind the goal. From the 2002 FIFA (FIFA) standard, to the 2007 FIFA standard, and then to the 2011 FIFA standard, after several revisions, the requirements for prohibited lighting areas have become more and more stringent, as shown in Figures 1 to 3 . my country's standards have also adopted FIFA's standard requirements and have continued to this day. 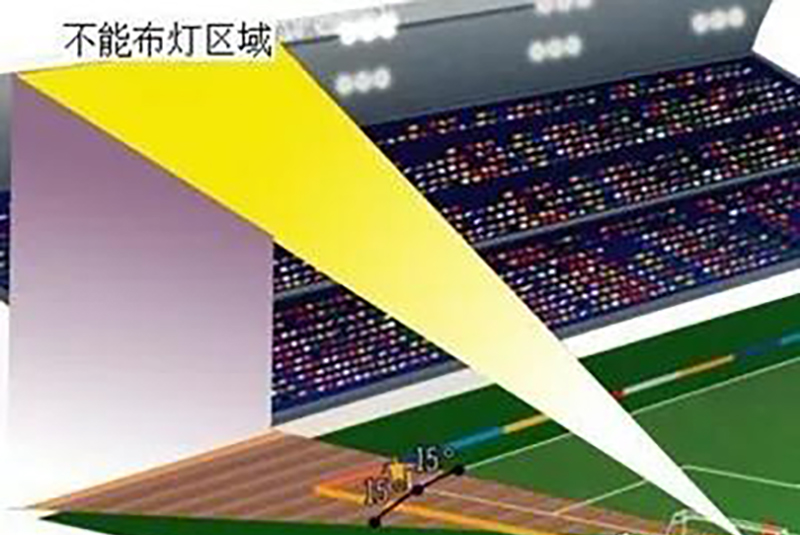 This requirement of FIFA is to prevent sports lighting from interfering with athletes, especially goalkeepers, and affecting the normal performance of the game. The starting point is correct, but the measures are questionable!

2. It is better to prohibit lights from interfering with athletes

You must know that it is the light that interferes with the athletes' normal competition, not the location of the lighting! Therefore, the lighting area and the projection angle of the light are more important.

For track and field stadiums and football stadiums, the above prohibited lighting areas can be illuminated. A common practice in engineering practice is to turn off the lights in this area in the football game mode and only use it during track and field games. Therefore, no light is projected into the field, and it will not affect the normal competition of the athletes.

For football stadiums, sports lighting fixtures can also be installed in this area. However, the aiming angle of the lamp should be avoided to project into the area that can affect the athletes' competition. There are mainly the following two situations:

The corner kick area is forbidden to arrange the lights (as shown in Figure 1). If the lamps are arranged, it is necessary to avoid projecting the lights to the large restricted area and surrounding areas; 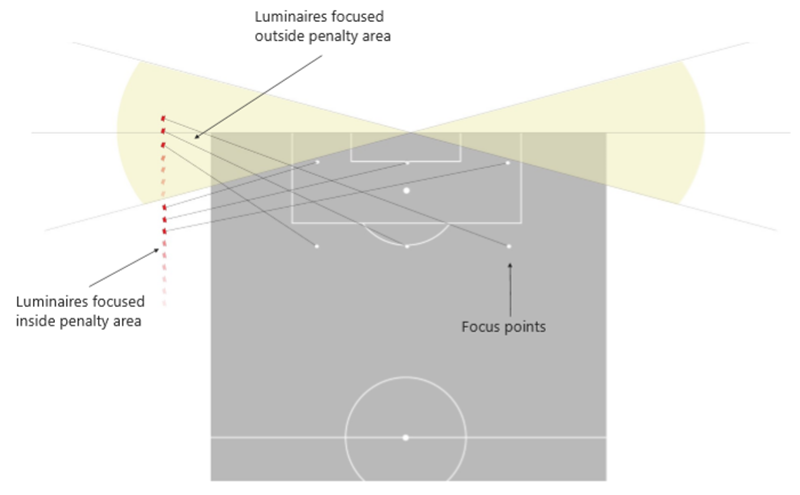 The picture above shows the new changes in the FIFA2020 standard. Although the standard has not yet been promulgated and implemented, after the research and application of the 2018 AFC AFC and the 2019 UEFA UEFA standard, the implementation of the FIFA new standard is within easy reach. Lamps can still be installed in the areas where lighting cannot be installed in the picture, but the projection point of the lamps must be outside the restricted area. The lighting in the restricted area is projected by lamps installed in other areas.

The projection angle of the lamps in the area behind the goal cannot be projected into the restricted area and the field, but can be projected on the field outside the bottom line, so that it will not interfere with the athletes. 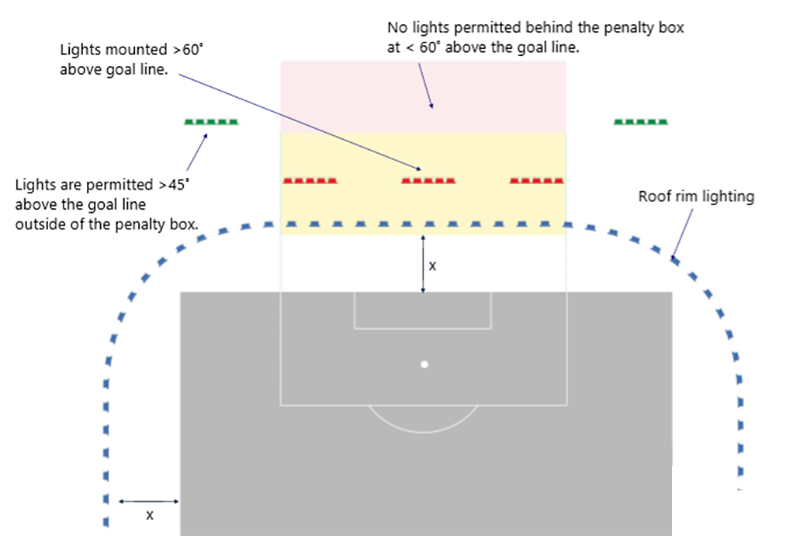 In the picture, the pink area means that no lights are allowed within the range where the elevation angle outside the restricted area is less than 60°;

The yellow area can be lighted outside the restricted area greater than 60°;

Green lamps are allowed to be installed in a range greater than 45° outside the restricted area.

In the project, the sports lighting lamps behind the bottom line can be shifted to the east and west sides, as shown in the green lamp part of Figure 5, which is conducive to achieving better results.

In fact, FIFA allowed the placement of sports lighting fixtures in the aforementioned prohibited lighting areas during the 2014 FIFA World Cup in Brazil, but it has strict requirements on the projection angle of the fixtures. On the basis of the research and application practice of the football federations of all continents, the introduction of the new FIFA standard will be a matter of course. 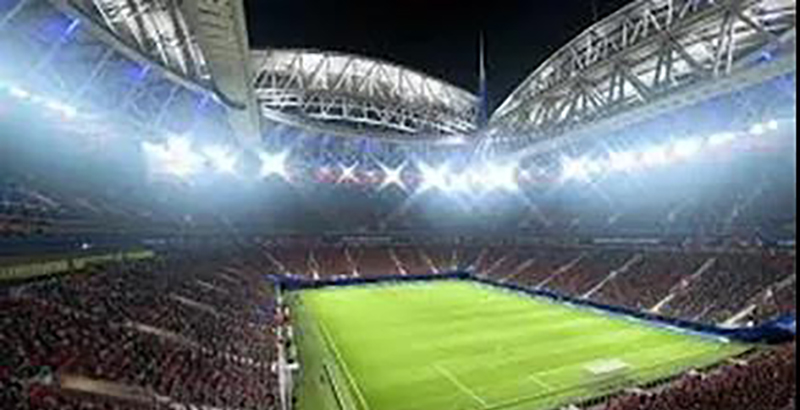