Hello everyone! The pace of 2021 is getting closer and closer, and I would like to extend my best wishes for the new year to everyone in Beijing!

2020 is an extraordinary year. In the face of the sudden new crown pneumonia epidemic, we interpreted the love of the world with the people first and life first, and we wrote the epic of anti-epidemic with united will and perseverance. In the days of overcoming the difficulties, there is the heroism of retrograde marching, the perseverance of stubbornness, the responsibility of sharing weal and woe, the bravery and fearless sacrifice, and the touch of mutual assistance. From angels in white clothes to soldiers of the people, from scientific researchers to community workers, from volunteers to project builders, from ancient and rare elderly to the "post-90s" and "post-00s" young generations, countless people have dedicated their lives to their missions and caring for the common people. Converge the force of trickle into a majestic force to build a copper wall and iron wall to protect life. The unwilling figures, the relay of heart and hand again and again, and the touching scenes vividly demonstrated the great spirit of fighting the epidemic. Ordinary creates greatness, and heroes come from the people. Everyone is amazing! Express condolences to all unfortunately infected patients! Tribute to all ordinary heroes! I am proud of the great motherland and people, and proud of the national spirit of self-improvement!

Difficulties show courage, hard work begins to succeed. We have overcome the impact of the epidemic, coordinated epidemic prevention and control, and achieved significant results in economic and social development. The "13th Five-Year Plan" came to a successful conclusion, and the "14th Five-Year Plan" was comprehensively drawn. The construction of a new development pattern was accelerated, and high-quality development was implemented in depth. my country has taken the lead in realizing positive growth among the world's major economies, and it is estimated that the GDP in 2020 will reach a new level of one hundred billion yuan. Grain production has won the "Seventeen Lianfeng". Major breakthroughs have been achieved in scientific exploration such as "Tianwen No. 1", "Chang'e No. 5" and "Struggle". The construction of the Hainan Free Trade Port is booming. We also withstood severe floods. The army and the people did not fear hardships and dangers, worked together to fight floods and rescue disasters, and worked hard to minimize losses. When I visited 13 provinces, autonomous regions and municipalities, I was delighted to see that everyone carefully implemented the epidemic prevention measures, raced against time to resume work and production, and went all out to innovate and create. Shenzhou Dadi is confident, self-reliant, full of resilience, and a vigorous and vibrant scene.

In 2020, we will achieve great historic achievements in building a moderately prosperous society in all respects and a decisive victory in the decisive battle against poverty. We launched a general attack on the deep poverty fortress and gnawed down the hardest "hard bones". After 8 years, nearly 100 million rural poor people under current standards have all been lifted out of poverty, and 832 poor counties have all lifted their heads. In the past few years, I have been to 14 concentrated contiguous areas of extreme poverty across the country. The enthusiasm of the villagers, the enthusiasm of the Yugong Yishan, and the dedication of the majority of poverty alleviation cadres, often come to mind. We must also insist that the green mountains do not relax, work hard on the ground, strive to paint a magnificent picture of rural revitalization, and move steadily towards the goal of common prosperity.

This year, we solemnly celebrate the 40th anniversary of the establishment of Shenzhen and other special economic zones and the 30th anniversary of the development and opening of Shanghai Pudong. Being on the shores of the surging South China Sea and the gorgeous Huangpu River in the spring tide, people have mixed feelings. The first trial has become a demonstration leader, and exploration and innovation has become an innovation leader. Reform and opening up have created miracles of development. In the future, we will continue to deepen reforms, expand opening up, and continue to write more "spring stories."

The road is not alone, the world is one family. After a year of ups and downs, we have more deeply understood the meaning of a community with a shared future for mankind than ever before. I have conducted many phone calls with international friends, old and new, and attended many "cloud conferences". The most talked about is working together and fighting the epidemic in solidarity. The epidemic prevention and control has a long way to go. The people of all countries in the world should join hands and fight through storms to dispel the haze of the epidemic as soon as possible, and strive to build a better home on the earth.

2021 is the 100th anniversary of the Communist Party of China. The century-long journey has been magnificent, and at the beginning of the century, the heart will grow stronger with time. From Shikumen in Shanghai to South Lake in Jiaxing, a small red boat carries the trust of the people and the hope of the nation. It has crossed the rapids and turbulent waves, and has become a giant ship that leads China's steady and long journey. It is a century-old magnificence to have great achievements in the future. We uphold the people as the center, always keep our original aspirations, keep our mission in mind, brave the wind and waves, and set sail to achieve the great rejuvenation of the Chinese nation.

Standing at the historical intersection of the "two centuries", a new journey of comprehensively building a modern socialist country is about to begin. The journey is long, only struggle. We have gone through thousands of waters and mountains through struggle and overcoming obstacles. We must continue to struggle, go forward courageously, and create even more brilliant glory!

At this moment, the lanterns are on, and thousands of families are reunited. The new year is approaching, and I hope the mountains and rivers are beautiful and the country is peaceful! I wish peace and prosperity, happiness! 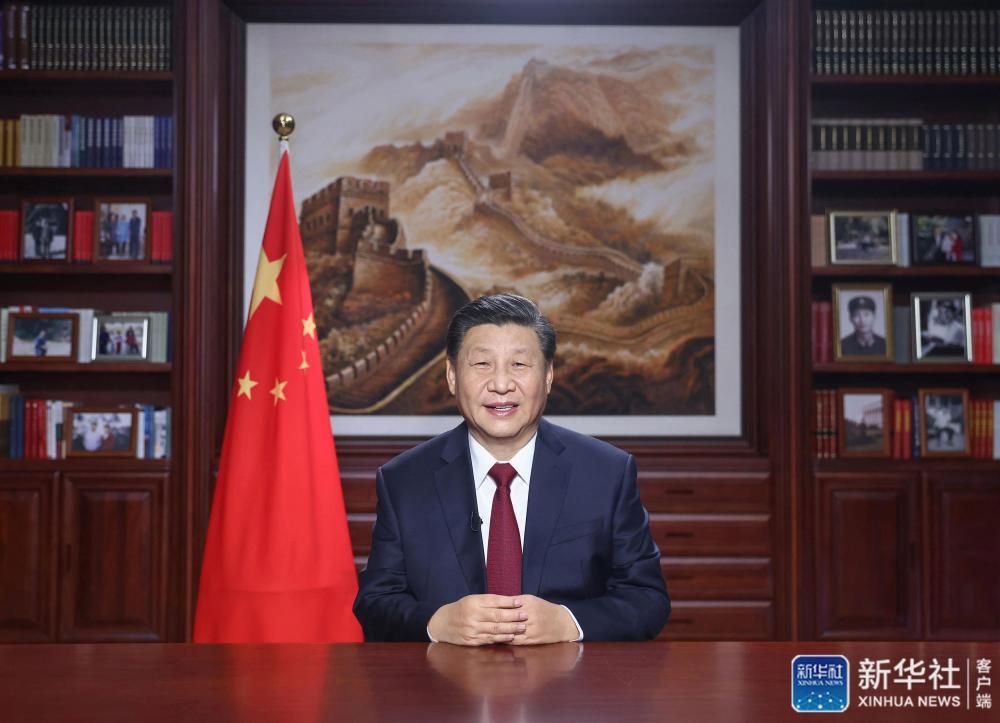