The Benefits And Advantages of LED Street Lamp Light Fixture

The Benefits And Advantages of LED Street Lamp Light Fixture

LED street light fixture with LED lamp housing is a remarkably common option of street lighting because of its many features and advantages.

The Different Styles of The LED Street Lamp Available:

There are a variety of designs based on how the LED street light integrates LEDs. There are two major options available: the use of high power LEDs in the fixture or the usage of low-intensity LEDs in the fixture. Other variations in style and design are the result of LED configurations, aesthetic design, and also the kind of heat sink which is incorporated with the LED street lamp.

Take LED pole lights as an example. They are energy-efficient alternatives to metal halide area lights and streetlights that can be used for many purposes, including parks, pathways, sidewalks, streets, and pole lamps. LED pole light fixtures are installed on top of poles and have a Type III, Type IV or Type V distribution that lights up the area around the pole. Post top lamps can be used for decorative outdoor applications and come in different shapes, sizes and color finishes. You can choose from different color temperatures like 3000K, 4000K or 5000K.

The Advantages of the LED Street Lamp:

In this part, you will learn about the 5 advantages of the LED street light fixture. It is a highly energy-efficient, innovative and eco-friendly light with no glass or mercury used. LED street lamp contributes and conserves a soothing and enjoyable experience. It has also a longer lifespan than any normal incandescent or fluorescent bulbs. Listed below are some benefits of the LED street light.

2. It has a long lifespan

The average lifetime of LED street lights is mainly 15 to 20 years, which is two to four times longer than normal incandescent bulbs. These LED bulbs mainly not fail or burn out as compared to other bulbs. They are barring a catastrophic failure of electronic or mechanical components of the LED street lamp. Thus, LED street lights problems will not easily occur.

3. It is RoHS Certified

LED bulbs of street lights don’t use any toxic material like mercury or neon. LED street light doesn’t produce any poisonous gases when it is damaged, therefore, it is much safe. The procedure of on/oFF is much fast. The LED light of the street lamp turns on instantly and doesn’t take to heat and start than any normal incandescent bulbs. Unlike sodium vapor lamps, mercury vapor or metal halide LED street light fixture, the LED street light turns on with the only blink of an eye. It is able to reach the 100% light output instantly.

4. It provides efficient and wide lighting

Mainly LED street lamp using a reflector to capture the light-emitting upward from the lamp. Even under the various conditions, the reflector absorbs much of the light. If we saw fluorescent or phosphor coated bulbs then we realize that bulb itself absorbs light directed back down by the reflector. The refractor helps the project to lay down on the street in the desired pattern but some light is wasted being directed up to the sky. LED street light fixture doesn’t require any reflectors and can be designed to provide the desired coverage without a refractor.

5. It shows no heavy glare

The lighting of the LED street lamp is directed on the roads which reduce the amount of light that gets directed into the passerby's eyes. This will greatly help protect people's eyes who walking in the street.

Well, here are the 5 Advantages of CHZ LED street lamp. For more information about how LED street lights can transform the street, please feel free to connect our team. 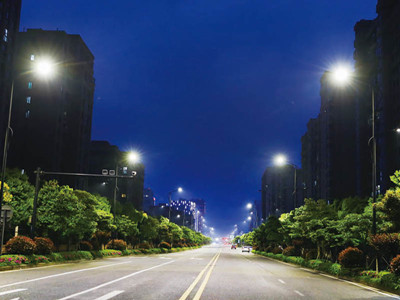